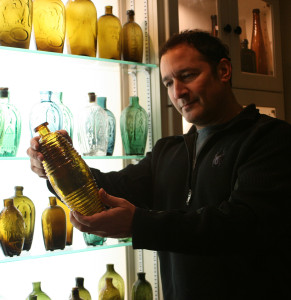 Michael George was born and raised in NH, and currently resides with his family in the countryside of New Boston. He has a bachelor’s degree in Commercial Art from Notre Dame College, and is currently employed as a Marketing Director. His passion for American glass started at an early age, as a collector of medicine bottles that were discovered at local auctions or unearthed in old dumps. Over the years, his expertise and knowledge for bottles expanded into historical flasks and early American glass wares, as he researched the production of 18th and 19th century glasshouses throughout New England.

Michael has become an avid collector and premiere antique glass dealer. He has conducted numerous lectures for historical institutions and produced formal appraisals for collectors or estate settlements, while actively coaching new collectors in the hobby. His glass articles have been published in such magazines and newsprints as Antique Bottle & Glass Collector, Bottles & More, Unravel The Gavel, and Antiques & Arts Weekly. In 2012, Michael served as organizer and curator of the 3-month long New Hampshire Glassmakers Exhibit at the Peterborough Historical Society. He is a member of the Federation of Historic Bottle Collectors, member of the Yankee Bottle Club, and member of the Merrimack Valley Bottle Club. In the Summer of 2013, Michael served as a Chairman and Organizer of the first national Federation of Historic Bottle Collectors (www.fohbc.org) show to take place in New England. The event was hosted at the Radisson Event Center in Manchester NH, consisting of 265 dealers from around the country, and thousands of attendees. He is also very active in the bottle and glass show circuit, participating in over a dozen events annually throughout the East Coast.